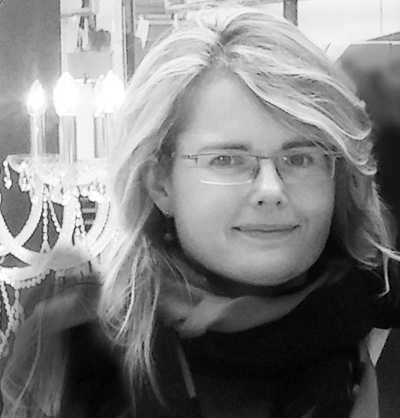 MgA. Jana Hradcová
She began her art career at the High School of Applied Arts for Glassmaking in Železný Brod (1993-1997), specializing in design and creation of glass figures. She continued at Faculty of Art and Design, Studio of Graphic Design, UJEP in Ústí nad Labem (2001-2006) under prof. ak. mal. Karel Míšek, PhD. During her studies she completed two half-year internships in Krakow (PL) and Sydney (AU). She received a two-week stay in New York (US) as a doctoral student. Her work is characterized by

the effort to maximize the integration of information and to create a clear visual component of design. She is constantly involved in creation of educational and interactive tools for environmental education and personal development. Knowledge of the glass field helps her to promote glass and ceramic artists purposefully and while collaborating on solo and collective events – she works for the International Symposium of Ceramics in Bechyně, cooperates on exhibitions and printed materials with the Association of Ceramic Artists and on association exhibitions as well as those of individual members: the permanent exhibition of sculptor and ceramist Lubomír Šilar ALTAMIRA – Town Museum in Lanškroun, Anna Klimešová, 4D – Topičův Salon in Prague, Miroslav Oliva – To Angels and Cats, Chodovská Tvrz in Prague 9 th and 10 th Ceramic Meeting in Kolín, exhibition Phenomenon B to the 130 th anniversary of the ceramic school in Bechyně – International Museum of Ceramics in Bechyně, branch of Aleš South Bohemian Gallery in Hluboká nad Vltavou, catalogue for IGS 2015, etc. She creates various outputs for presentations of glass artists and designers, e.g. Zdeněk Lhotský and studio Plechov, Jitka Kamencová Skuhravá, Jaroslav Skuhravý, Jan Frydrych, Zdeněk Štěpánek. Together with Eva Fišerová she is produced travelling exhibition project Neighbors, of which she is also a curator; outreaching art to sociological sphere. She teaches graphic design as well. 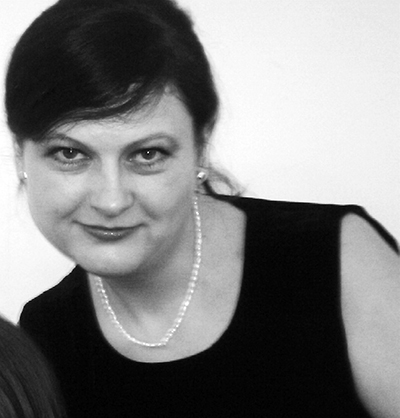 BcA. Dita Hálová, DiS.
After graduating at Secondary School of Fashion in Prague – Holešovice (1990-1994) and later at Secondary Art School of Textile Crafts and Higher Vocational School in Prague (1994-1997), she studied in Fashion and Textile Design Studio under prof. ak. mal. Bohdan Mrázek (1998-2003) and Natural Materials Studio under prof. ak. mal. Jaroslav Prášil (2003- 2004) at the Faculty of Art and Design at Jan Evangelista Purkyně University in Ústí nad Labem. She also studied at the Academy of Arts,

Architecture and Design, Department of Theory and History of Art and New Media (SSZ) under prof. PhDr. PaedDr. Jindřich Vybíral. Besides her work as a fashion designer, she co-organized traveling Czech-Italian exhibitions of art school students and graduates (FUD UJEP, VŠUP, AVU, FAVU Brno, IPUS Ostrava). These exhibitions were held in various places home and abroad – in Ústí nad Labem, Prague, Ostrava, Brescia and Mostar (2003-2006, 2008). She took part in several other exhibitions, competitions and fashion shows (nominations for TOP STYL DESIGNER, Styl and Kabo, BVV 2003 and 2004). For a long time, she has been involved as a curator in the design field, projects and exhibitions of Museum of Design and Gallery in Benešov u Prahy. First and foremost, she cooperated with the Design Cabinet CZ on competition National Student Design Award associated with travelling exhibition NEW G(O)ODS (2008-2011) and was involved in a large multinational competition of company Grund, a. s. (Committee members: Luigi Colani and Alessandro Mendini, 2008). She is responsible for project Folklore lives! Folklore traces in contemporary design of Visegrad Countries (Czech Centre Prague, Stockholm, Bratislava) and other smaller exhibitions and projects. Since 2009 she has been working in Museum of Decorative Arts in Prague (UPM). She is involved theoretically and organizationally in exhibitions of contemporary glass, ceramics and porcelain at UPM, e.g. In Search of Glass (UPM permanent exhibition, 2010), All the Best! (UPM permanent exhibition, 2011), VIP Glass –

Outcomes of IGS 2012 in Nový Bor (UPM exhibition hall, 2012). As a curator she put together retrospective exhibitions at UPM: P.RADA! Parada!, Pravoslav Rada – ceramic work (2011), FIRE / CLAY / ICE, Václav Šerák and students (2014 and 2017 Art Gallery in Karlovy Vary). She organized exhibitions e.g. at International Museum of Ceramics in Bechyně, branch of Aleš South Bohemian Gallery in Hluboká nad Vltavou (2014), solo exhibitions (Bohumil Dobiáš Sr., Bohumil Dobiáš Jr., Pravoslav Rada) and Phenomenon B of an exhibition project to 130 th anniversary of the foundation of the ceramic school in Bechyně. In cooperation with UPM she has been organizing solo exhibitions of the members of Association of Ceramic Artists (SVUK) including production of catalogues, e.g. Jindřiška Radová – Rabasova Gallery in Rakovník (2016), Anna Klimešová – Topičův Salon in Prague (2016), Zdeněk Manina – New Hall in Prague (2017), and of many other artists: Šárka Radová, Miroslav Oliva, Vladimír Uhlík and collective exhibitions of contemporary Czech ceramic sculpture in cooperation with SVUK: Artceramics (NewTown Hall in Prague, 2013), Ceramic Meeting Kolín (2012, 2015), Ceramic Sculpture Kadaň etc. She was part of the organizing team of the International Symposium of Ceramics in Bechyně (2008-2016) and also worked on sculpture exhibitions Summer Ceramic Sculpture (2008-2011). She is involved in promotion and training in the silicate field; not only as a part of her work at UPM. She has become a co-author and creator of website presentations: www.designcabinet.cz, www.artceramics.cz, www.keramicka-plastika.cz,